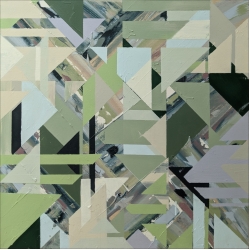 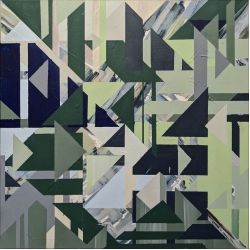 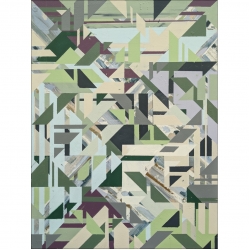 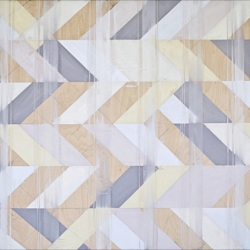 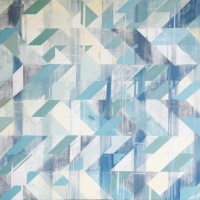 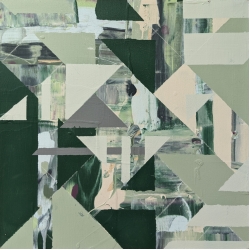 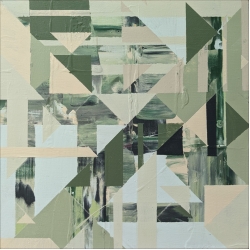 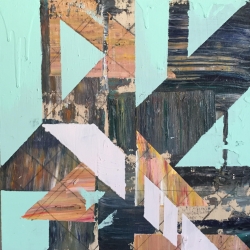 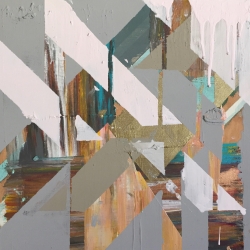 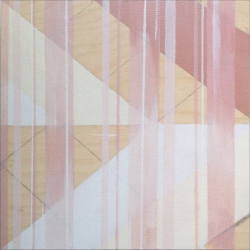 "When I moved to the west coast of Canada 10 years ago, I started collecting beach glass on my frequent trips to the seaside.

Beach glass is created after many years in the ocean, being tumbled and worn in the waves as they crash on the beach, getting drawn back with the tides, over and over again. The years spent submerged in salt water wears each shard of glass down from its sharply broken and shiny beginnings, to create a soft, organic shape with subtle colour and a frosty appearance, each piece so unique and special. I found this process to share many characteristics with my painting practice; the way my canvases start off with hard grid lines and precise edges that become blurred, faded, distorted, and textured as paint is added to the canvas or sanded away, over and over again.

Just as a jagged piece of glass gets tumbled within the ocean, the repetitive erosion creating a beautiful, yet imperfect, artifact, this series of paintings aims to capture that same sense of the endearing beauty in imperfection - one that draws attention to the time it has taken to become, and revealed only after many repetitions of a continuous process.

The palettes for these paintings were inspired directly from the many pieces of beach glass I have collected from the beaches by the Pacific Ocean on the west coast of British Columbia, Canada." -Taryn Coulson

Taryn Coulson is a contemporary painter. She graduated from the Studio Arts Program at the University of Guelph, Ontario with an Honours Bachelor of Arts Degree in 2011.

Taryn's interest in painting, began as a response to the ubiquity and overload of images through technological sources, and our experience of artworks becoming increasingly distanced from their original source. The idea of failure through technological reproduction, pattern and repetition's inevitable erosion of image are fundamentals of her practice.

The process of creating a painting is the most important aspect in her work. Each piece begins with a neatly planned grid structure, and through the performative addition and subtraction of paint, repeating patterns, techniques and colours, each grid gets built up, broken down, and in time becomes its own completely unique artwork, or ends up a big mess.

This aspect of potential mess and failure is what drew Taryn into art marking (especially paintings) in our increasingly digital world. Fascinated with the possibilities in variation that happen as a physical process gets repeated again and again to create those moments of beauty when a medium is being pushed to its limits, and breaks apart into something spectacular.